I think a lot of us had problems as kids for adding a bit of ‘graffiti’ to the walls in our rooms, but now that we’re all adults and can decorate our rooms however we want. seems… is there a place for graffiti on the walls? When I started researching this topic, I thought – surely this is a topic for singles – no woman will go for that, right? It turns out it was spectacularly short-sighted on my part!

The different types of art that today come under “graffiti” are many and diverse, and you don’t have to paint the walls either – I have found all kinds of graffiti inspired bedroom furniture, and a whole bunch of them. Large format sticker pack that could be used to create more feminine ‘stick bomb’ type walls to stunning tunnels that might see you one day get lost in your own bedroom.

So can graffiti be in the bedroom?

You bet! I’m going to share a few examples with you in a moment, but I think it’s a trend that’s really accelerated recently – the first examples I could find were kids’ rooms sporting their favorite animated characters that had been lovingly painted on their walls (note to parents of these kids: you’re awesome) but things have definitely moved in a more grown-up direction when it comes to Google’s image index. Go see if you don’t believe me!

Oh, just before you do, take a look at these cool examples – you won’t regret it!

Who can honestly say that her younger sister wouldn’t have liked it around the age of 10-15? Everything was done to such amazing specs which foreshadows this was a professionally designed piece – I credited the studio I found producing this shot here – above, credit where it is due.

The girl herself looks like a perfect representation of the character in question, but the building in the background, the subtle shading around the objects, and even the tree on the right wall all give a distinct oriental flavor – c ‘is a style popular in these countries, with rose petals often found “blowing” from a neighboring window. Add in the multi-colored drawers and the other incredibly contrasting elements and you have what I believe is just about the perfect bedroom for a modern young teenager.

Cool, eclectic, hip and trendy – Just for men? I do not think so! 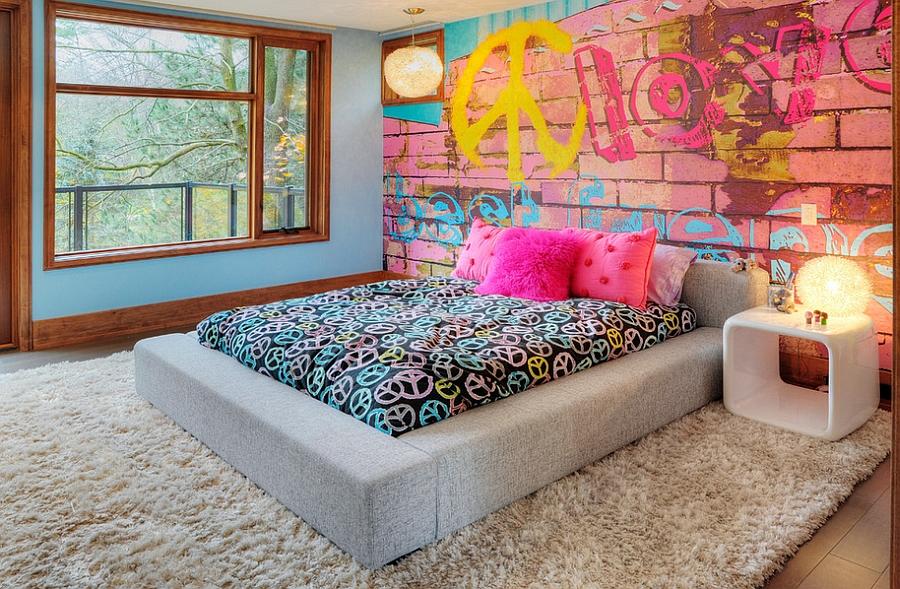 This photo made me think: the bedroom is THE place for graffiti! Looking like something you might expect graffiti artist Eduardo Kobra to comb through, you wouldn’t dare add something like this to your living room or kitchen (although the bathroom might have some cool options … one to think about later) but apparently seven out of ten women surveyed (unfortunately demographics were not given alongside that number) said they would absolutely love this as a bedroom. 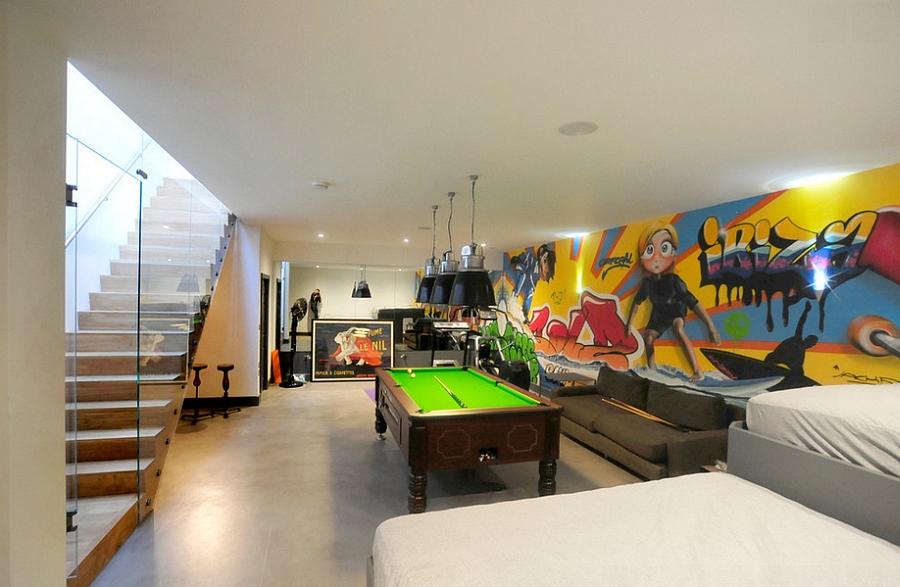 Bet this one belonged to a younger man, although it could be more of a man cave than a real bedroom – we certainly have beds on display here, alongside other artwork, a pool table, a sofa to sit on and if there’s not the biggest TV you’ve ever seen or a short throw projector tucked away somewhere in this piece, a crime has been committed.

Even though this room isn’t used as an everyday bedroom, it certainly shows how graffiti can be used very well in rooms like the bedroom, adding huge amounts of color to otherwise massive open walls is so much more interesting, and the possibilities are endless.

Better leave no room for ambiguity this time

Now, I’m not saying that there aren’t women who won’t love a good graffiti style skull painted on the wall next to their bed – we’re all on equal opportunities here folks. What I will say for sure is that this is most definitely a bedroom and that its 99.9% owner loves it. Who wouldn’t? Nice contrast all around, great dark wood furniture, and oh… this lack of space. One thing’s for sure, if I had kept my own bedroom this tidy as a kid, I doubt I would have had any trouble with my… um… Graffiti art.

So, just three examples – are you convinced? Is the bedroom the right place for graffiti art? While you’re thinking about it, I’m going to take a look at this bathroom idea I thought of earlier …